Welcome to the Smolderforge Support Community! Go ahead and register a new account or login to a current one already made. Please post in the correct forums and be kind and respectful to others! 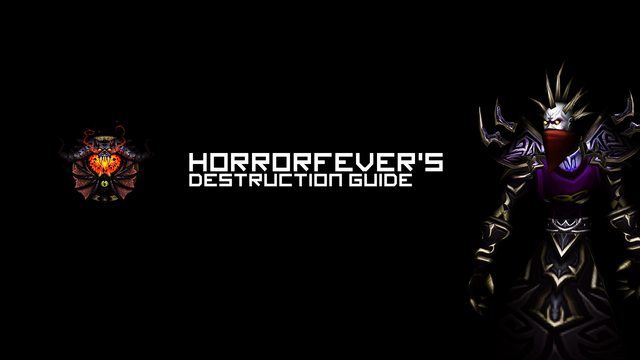 Greetings, aspirant destruction warlocks. I shall not waste your time with shitloads of opening words, so let's just say that I had nothing better to do with my life at that stage and therefore I have decided to come up with this. Well, let's get straight to bussiness.

Some music that would fit a destru lock PvP video to listen while reading: - CLICK -

Please note that the content below is the way I'd do things, those are my preferences and taste. I'm not saying that they are the only possabilities, they are just the best for me.
Last edited by Horrorfever on 21 Nov 2014, 03:40, edited 23 times in total. A destru chain is a perfect combination of your abillities combined with your damaging spells in order to bring a target down in no time.

There are many ways to perform a destru chain, here are some:

Pet control is your best friend, make sure you binded all of your pet abillities including the follow and stay one. There are opponents you will need to have your pet far from hugging you yet in casting rage in order to avoid it getting controlled, while you may need it to keep attacking another opponents in order to prevent them get them out of combat for instance.

Users browsing this forum: No registered users and 0 guests